Not to be confused with 24th Century BOY by Tatsh from beatmania IIDX 19 Lincle. 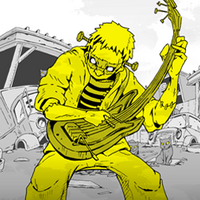