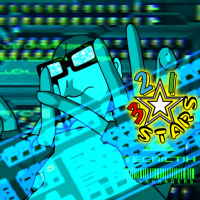 This popular beatmania song makes its appearance in pop'n!

Underneath the warm melody is some kind of surreal world, where vigorous drums pound out high-octane beats.

I will now answer the question about how to read this song title.
It is read as "three-two-one-stars".

You have unlocked the song "321STARS" by DJ SIMON. Combining a really unique mix of sounds and a variety of beats and tempos, "321STARS" is one of the most entertaining songs to choose when playing with friends. Get ready to 3,2,1 start dancing to this song!

The main background is a boy on his keyboard, with the image of him clacking away with like he's hacking. It's personally my favorite animation.

※ Denotes chart has been changed from from the older AC chart (total notes: 294).

※ These charts don't have Freeze Arrows in the PlayStation version of Dancing Stage Fusion CS.