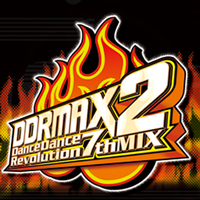 Songs listed by order on the songwheel.

For more information on how to unlock these songs, please see the Unlock Information section.

These 19 songs are only playable in their respectives courses in Challenge Mode. In the game, WILD RUSH's Double CHALLENGE difficulty is erroneously marked as 1 instead of 8.

Each song is listed with their original version's banner, background and song title.

To unlock this song, you must clear a HEAVY chart with a rating of AA or higher on your last stage. MAXX UNLIMITED's HEAVY chart (Single or Double depending on current play style) will then become available as your EXTRA STAGE, with no way to change difficulty or song.

The EXTRA STAGE is on a "Pressure" life meter; it starts out at maximum health, but will not be replenished. In addition, the x1.5, Reverse, and Dark modifiers are in effect.

To unlock this song, you must AA one of MAXX UNLIMITED's HEAVY charts on EXTRA STAGE. 革命's CHALLENGE charts (Single or Double depending on current play style) will then appear as your ONE MORE EXTRA STAGE. Like with the EXTRA STAGE, you cannot change the song or chart.

The ONE MORE EXTRA STAGE is on a "Sudden Death" life system: If you break your combo, you instantly fail the stage. The modifiers 3X, Dark, and Reverse are on by default, and cannot be turned off.

Shortly after the release of DDRMAX, KONAMI put up a poll for what songs should be revived for inclusion in its sequel, DDRMAX2, as one of DDRMAX's most common criticisms was the removal of all songs from the series prior. The poll only included KONAMI originals in the arcade series up to 5thMIX. Originally KONAMI only planned to revive the top 15 polled songs, but poll feedback were so high they decided to revive the top 30 as default songs (a few scattered other revivals were later added as unlocks). The results of said poll, as shown on this archived DDRMAX page, are as follows:

The top 5 songs also appeared in the Japanese CS release of DDRMAX2.

The following songs have received difficulty changes since their last appearance:

In DDRMAX2, all players using the arcade machine contribute points that can unlock various content hidden in the game. A total of 31 items can be unlocked. The total of points earned is seen by the player after each play session with the item numbers that are unlocked so far (if any).

Points are earned as follows:

This applies to each song played during CHALLENGE courses as well. In VERSUS play, both players contribute points; in DOUBLE play, the player contributes double the points.

By default, it takes 750 points to unlock an item, but if unlocks happen too quickly or slowly, that value will be adjusted downward or upward when the next item comes up. For example, if players earn two unlocks in a short time period, the next unlock after that will likely be raised to 1,500 points. Additionally, the items do not necessarily unlock in order. If an item is unlocked within a short time, then the next item is skipped. Once the list gets down to 30, it will cycle back to the top and unlocks will resume with the next item. Item 31 will always be unlocked last.

Alternatively, KONAMI also provided command codes for arcade operators to manually unlock content. To do so, all the earned points in the machine have to be reset and thus, all unlocked items (if any) will be lost. Each PASS code only unlock the specified amount of items.

The following songs from DDRMAX have been removed: