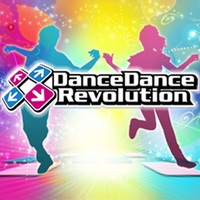 The first LEVEL listed unlocks the song, while the second LEVEL unlocks its CHALLENGE charts.

For more information, please see its own page.

NOTE: The Shiritsu BEMANI gakuen event ended on December 19th, 2013. The remaining songs can be unlocked by play count on DanceDanceRevolution (2013).

To unlock Elemental Creation, you must have unlocked all the previous 9 Shiritsu BEMANI gakuen songs, then you need to raise the Friendship degree of dj TAKA and DJ YOSHITAKA to 100%.

For more information on the event, please see its own page.

UPDATE: Locked jubeat・GITADORA・DDRのTriple Journey songs on DanceDanceRevolution can be unlocked from October 1st, 2013. Each game session will unlock a song, and after all the songs have been unlocked, CHALLENGE charts for six songs can be unlocked.

To access the tournament for Engraved Mark, you had to link your eAMUSEMENT account to ポップンリズミン, and then play Engraved Mark on it once. Since March 5th, 2014, this tournament is available for everyone to access.

For more details on the Result Star system, see this page.

The Result Star system introduced in DanceDanceRevolution X3 vs 2ndMIX was carried over, except that red stars (for clearing a song above a certain level) are no longer obtainable.

As like previous releases since X2, newly added EXTRA STAGE-specific song has an additional level requirement, which can be accessed depending on the number of stages set by the operator and the accumulated total level of difficulty for the songs they played. The minimum levels are:

The dates of the EXTRA STAGE songs, with the dates and when the song received CHALLENGE charts or unlocked for normal play, are listed in the table below:

Three special EXTRA STAGE songs were added on March 25th, 2014, as part of the TAG生誕祭. To access any of them, songs from the "TAG's Birthday" Special Folder (『TAG生誕祭』特設フォルダ) have to be played first. This folder can be found when sorting by BEMANI TITLE. Each time a song from that folder is cleared, a flower mark on the song's jacket is added which can be seen in the music select screen. ÆTHER and esrev:eR will be playable on the EXTRA STAGE as more flowers are obtained, with SABER WING (satellite silhouette remix) available after playing all the 28 songs found in the special folder: