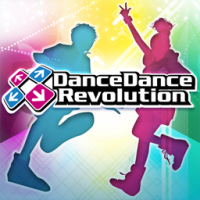 Once again, EXTRA STAGE unlock conditions use the same Result Star system first seen in DanceDanceRevolution X3 VS 2ndMIX. As usual, the LIFE GAUGE modifier is restricted during EXTRA STAGE and is set to LIFE4.

On August 12th, 2014, the criteria to access the EXTRA STAGE was simplified. When playing VERSUS, both players' Results Stars are combined together, which will determine access to the EXTRA STAGE when both players had at least 9 stars accumulative. A Red Result Star (★) was also added on the update when the player uses LIFE GAUGE modifiers (RISKY or LIFE4), regardless of results.

*As usual, the dark blue Daily Star is an exception and will be given out even for non-Premium Play.

The EXTRA ATTACK unlocking method allows the players to unlock EXTRA STAGE-only songs available on the EXTRA ATTACK folder. By playing songs in the EXTRA ATTACK folder, the SURVIVED BONUS meter will increase for the selected difficulty. Once the meter is completely filled, the song will be unlocked on that difficulty (and all the lower difficulties, if applicable) for normal play. The SURVIVED BONUS meter of a song carries between games using e-AMUSEMENT. The EXTRA ATTACK requires that the Single and Double charts of the songs have to be unlocked separately and that only BEGINNER to EXPERT charts can be unlocked. Once the songs have been unlocked, they are added to the DanceDanceRevolution (2014) folder.

From September 18th, 2014 to October 16th, 2014, a special campaign named Aki no daishuukakusai (秋の大収穫祭, Big Harvest Festival of Autumn) was added to the game. By playing any song, a bonus ranging from +1 to +4 LIFE was given depending on a few requirements. The EXTRA LIVES acquired were added by Dance Level, and the total could be seen by pressing "4" on the 10-key pad to access the event panel. These EXTRA LIVES were then available to use during EXTRA ATTACK. Usually, the LIFE GAUGE modifier was locked to LIFE4 but with this event, it was possible to increase the number of LIVES to any number as long as the players had enough EXTRA LIVES.

From December 17th, 2015, most non-cross BEMANI event songs are automatically unlocked for all players.

From October 16th, 2014, to November 13th, 2014, CHALLENGE charts for Kind Lady, Malacca, PARANOiA KCET ～clean mix～, and Tribe, as well as the KONAMI Arcade Championship 2013 CHALLENGE charts, could be unlocked by the same above method. When unlocked, these songs appear in their respective versions.

From December 17th, 2015, these charts are automatically unlocked for all players.

(※) Starlight Fantasia (Endorphins Mix) is unlockable again since April 1st, 2015 for players who completed ユニバーヒルズproject. It was previously only available on TAG's birthday on March 25th, 2015.

By playing SOUND VOLTEX II -infinite infection- during the stated periods, you will raise the infection level and unlock the following songs from the SOUND VOLTEX series.

The YuniverHills project (ユニバーヒルズproject) event started on November 17th, 2014. The event consists on building an apartment to get more residents on it. This can be done by playing a set of three daily songs that are shown when you play (you can also check them by pressing the 4 button on the numeric keypad on the song select screen). After getting a certain number of residents, you will unlock certain charts of a song, starting with BEGINNER and BASIC, then DIFFICULT, and finally EXPERT. For a list of the daily songs, please see this page.

This event ended on December 2nd, 2015. All ユニバーヒルズproject songs are automatically unlocked on December 3rd, 2015 with an eAMUSEMENT PASS. 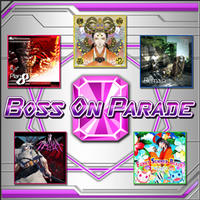 The BOSS ON PARADE event began on January 22nd, 2015. The player's goal is to unlock five boss songs that are crossovers from other BEMANI series (beatmania IIDX, GuitarFreaks & DrumMania, jubeat, pop'n music, and REFLEC BEAT), plus a final boss song, for normal play. To unlock these songs, the player must earn medals and jewels.

Once ten medals have been obtained for a boss song, a special BOSS ON PARADE folder appears, with that boss song temporarily accessible. If one does not have Premium Play, it appears on FINAL STAGE instead.

When playing a boss song in BOSS ON PARADE folder, the LIFE4 option is automatically turned on. Playing (clearing not required) a boss song costs the player all of their medals for that song (and resets the medal count for those songs). The player will also earn two jewels which also count as medals that are permanent, meaning that the player have to obtain two less to make the song available. By playing the song five times (i.e. obtaining all ten jewels), that song becomes unlocked for normal play.

On February 4th, 2015, the list of medal-supported songs was revealed on the official website. On February 16th, 2015, requirements for the event were made easier:

As of March 5th, 2015, all players who have passed the final boss song also unlock it for normal play.

As of July 2nd, 2015, the requirements for the event were made significantly easier a second time. Eight medals/jewels are required instead of ten, meaning that four plays are now required to unlock.

The BOSS ON PARADE event ended on December 24th, 2015. All songs were unlocked for normal play after.

The following song can be unlocked in EXTRA ATTACK since January 7th, 2016:

Replicant D-ignition was first announced at the JAEPO 2015 event. A preliminary announcement movie was released on February 18th, 2015 featuring "The Dark One" and RINON, who is seen fusing six colored orbs into her body. The event started on March 5th, 2015, and Truare! must be unlocked and cleared first.

The first goal is to fill the five NITRO (ニトロ) vials. Each NITRO vial corresponds to a new song that becomes playable once that vial is filled:

Once at least one vial has been filled, the Replicant D-ignition folder will appear during EXTRA STAGE, with the song based on which NITRO vials have been filed. When the cursor is placed on the Replicant D-ignition folder, a low-pitched siren will play. When selected, the game will first display a warning prompt informing about high difficulty songs; once the folder is opened, the player is then locked onto the folder until the end of the credit, and RINON will be forced as the dancer character. Unlike Replicant D-action, this folder can be accessed on VERSUS with at least one player clearing BOSS ON PARADE, but that other player who did not clear the event will retain the chosen character instead of RINON.

As like Replicant D-action, its game background and background music change to a darker mood, while song previews and BPM are hidden. There, the player is presented with songs they have made available.

By clearing EGOISM 440 with the same aforementioned condition, the player will play MAX.(period) as ENCORE EXTRA STAGE based on the difficulty played for EGOISM 440. A cutscene will play before the ENCORE EXTRA STAGE and will not be able to change any options in-between. 1.5x speed and Reverse are forced during play, and "The Dark One" is set as the character.

The second phase of Replicant D-ignition started on March 26th, 2015, which added MAX.(period) (and its CHALLENGE chart) as an EXTRA STAGE song (if the player clears said song as ENCORE EXTRA STAGE), and similar to EGOISM 440, playing MAX.(period) will cost all the five orbs (now as a darker shade). During this Phase, if the player's character is neither RINON nor "The Dark One", then their character will appear like normal with "The Dark One" appearing as a backup dancer. However, if the player plays EGOISM 440, their character will still be replaced by RINON like in in the first phase.

By obtaining a AA rank or higher on MAX.(period)'s CHALLENGE chart, another cutscene will be played and will be forced onto playing Over The "Period" as ENCORE EXTRA STAGE, on two levels lower than MAX.(period) played on EXTRA STAGE. Note that the player plays without any modifiers and speed modifiers cannot be set as well. As the words "ATTACK PERFECT FULL COMBO!!" are display during the announcement; a PERFECT FULL COMBO is required to clear the stage (getting anything lower than GREAT will trigger an instant stage failure). Like MAX.(period), if the player's character is neither RINON nor "The Dark One", RINON will appear as a backup dancer instead of "The Dark One".

As of April 9th, 2015, orbs for the first six Replicant D-ignition songs can be obtained on DIFFICULT, and MAX.(period)'s orb can be obtained on EXPERT. Due to a bug, if two players were on Versus Play with Player 1 on non-Premium Play and Player 2 on Premium Play, it was possible for Player 1 to obtain an orb for MAX.(period) on BASIC or DIFFICULT, and an orb for EGOISM 440 on BEGINNER or BASIC. This was fixed on April 14th, 2015.

As of July 2nd, 2015, orbs for the first six songs can be obtained on BEGINNER, and MAX.(period)'s orb can be obtained on BASIC. In addition, when Over The “Period” is cleared, the Thank You For Playing screen becomes a picture of RINON walking into a white light with the words "Replicant D-ignition" and "THANK YOU FOR PLAYING" displayed. Should the player re-enter Replicant D-ignition after clearing Over The “Period”, the orbs go back to their first Phase brighter color.

On August 6th, 2015, the Replicant D-ignition event has ended and the folder is no longer accessible and neither RINON nor "The Dark One" are unlockable for those who did not unlock them during the event.

All the seven songs from the folder had moved to the EXTRA ATTACK folder, thus revamping the unlocking conditions. These conditions are as follows:

As of December 24th, 2015, everything in Replicant D-ignition is automatically unlocked for everyone except Over The “Period”'s CHALLENGE chart, which is an EXTRA STAGE-exclusive. This chart was unlocked by default on DanceDanceRevolution A.

It is worth noting that the Replicant D-ignition boss songs use special background stages: the NITRO vial-unlockable songs use the BOOM DARK stage like with the BOSS ON PARADE songs, but colored according to the color of their respective NITRO vial. EGOISM 440 and Over The “Period” use a gray version of the REPLICANT dance stage, while MAX.(period) uses a midnight blue version of the REPLICANT dance stage.

The Kaitou BisCo no yokokujou!! (怪盗BisCoの予告状!!) event started on June 17th, 2015 and ended on December 21st, 2015. By playing BeatStream, the player could unlock new songs in the game and new crossovers from other BEMANI games in DanceDanceRevolution.

The following songs can be unlocked in EXTRA ATTACK since January 7th, 2016:

The following songs have received difficulty changes since their last arcade/console appearances: