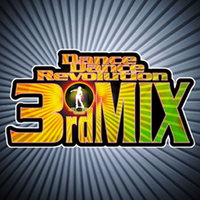 Songs are listed in order on the songwheel on MEDIUM.

To unlock one of these hidden remixes, you must play as a specific character to make the song appear in SELECT MUSIC:

Only songs with a ※ are available when playing with one credit and when the player selects either VERSUS, UNISON, or DOUBLE.

The difficulty listed only applies when in 3rdMIX Mode. In STEP STEP REVOLUTION, all songs will be set to SSR/MANIAC difficulty. Not included in the table are the courses CAPRICE and ROULETTE, which both have the first and second song on BASIC and the last two are set as ANOTHER. CAPRICE songs are selected randomly by the game, but the player will be able to see the selection before starting while ROULETTE songs will be kept hidden from the player until they have to play them or songs will be picked at random during the game. Another course can be created when loading a MEMORY CARD to the cabinet; the order of the songs are selected by the memory card.

All of these must be entered on the SELECT MUSIC screen.

This section was adapted from Aaron in Japan.

In order to calculate the Dancer Score, the Base Step Score is required:

The Dancer Score includes 4 formulas, the first 3 are related to the timing:

If the life bar becomes depleted, but the song continue to play (due to Versus mode or Autofail set to off), the Base Step Score is replaced by 1.

The final formula for the dancer score is a bonus for the final note of the song:

This formula will gives its full bonus value if the step was a Perfect, half of it for a Great and 0 for a Good or worst.

The Grade is calculated with a different formula using Dance Points. Each note in the song has a value of two Dance Points assigned to it. When adding them all up, the result is the maximum number of possible "Dance Points" for the song. This equal to 2 × N. N still being the number of notes in the song.

The grade is then found by adding all the Dance Points calculated as follows:

The grade letter is then matched with the closest corresponding value:

The following song from previous DanceDanceRevolution titles has been removed: