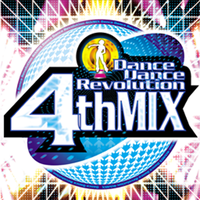 Due to the category interface of 4thMIX, songs are grouped into categories, as opposed to an ABC or foot difficulty order.

Note: These codes are only for the Japanese version. The Asia version has no code system for unlocking the 12 hidden songs. (However, if the machine has a Memory Card slot, these can be played via LINK MODE NONSTOP "ORDER" courses if the hidden songs were set in NONSTOP ORDER from the PlayStation Arcade Link System. If one of the songs set was not present in the Asian version of the game, it will be changed to ONLY YOU.)

To unlock the hidden songs in DanceDanceRevolution 4thMIX, the arcade operator needs to access Test Mode.

The following song from previous DanceDanceRevolution titles has been removed: