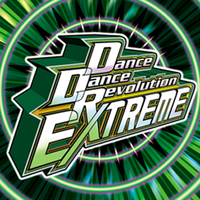 In EXTREME, the use of APPEND codes by the arcade operator was restored and the point system added in DDRMAX2 was removed. Similar to how previous APPEND codes worked, each code also unlock the preceding PASSes. For example, the 3rd PASS will unlock the content included in the 1st PASS up to the 3rd PASS. To unlock everything at once, use the 7th PASS (FINAL) code.

The 7th PASS unlocks these songs along with all of its charts to be playable outside of the FINAL STAGE.

The legend of MAX can only be played during EXTRA STAGE on HEAVY. However, the 7th PASS unlocks the song along with all of its charts to be playable outside of the EXTRA STAGE.

To access the ONE MORE EXTRA STAGE, you must AA The legend of MAX as your EXTRA STAGE. You will then start playing Dance Dance Revolution on CHALLENGE difficulty with 3x Speed, Reverse, and a life gauge set to RISKY (one Good/Boo/Miss/N.G., and the song ends).

Similar to the EXTRA STAGE song, the 7th PASS unlock the song and all of its charts to be playable outside of the ONE MORE EXTRA STAGE.

Like DDRMAX2, EXTREME has multiple unlock codes available, however there is no way unlock songs via game play.

The following songs from previous DanceDanceRevolution titles have been revived: