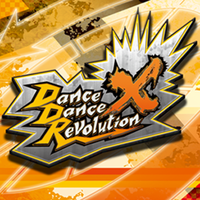 The following songs could be unlocked from March 16th, 2009, by clearing their respective original song's EXPERT charts eight times:

As of October 1st, 2009, these songs are available for all players by default

The following songs are medleys of several DanceDanceRevolution X and SuperNOVA2 songs. Much like the DanceDanceRevolution 5thMIX Long Version songs, playing an Xmix takes two non-Xmix stages. None of the Xmixes have BEGINNER or CHALLENGE charts. They appear on second to the FINAL STAGE when selecting songs other than Xmix.

All songs new to DanceDanceRevolution X were unlocked for normal play on October 1st, 2009, except PARANOiA MAX～DIRTY MIX～ in roulette(X-Special).

On FINAL STAGE, the available difficulties for On The Break depend on the performance grade the player obtains on any stage prior to FINAL STAGE:

By clearing On The Break (or RANDOM, using the available difficulties for On The Break) on FINAL STAGE with a AA or AAA, EXTRA STAGE will be available afterwards.

On EXTRA STAGE, the player must select either SABER WING or SABER WING (AKIRA ISHIHARA Headshot mix) (using the available difficulty for SABER WING), or an EXTRA STAGE-exclusive X-Special chart, and obtain AA or AAA to proceed to ENCORE EXTRA STAGE afterwards.

The first set of stages (for the 1st game) were added on February 12th, 2009. The other songs were added to DanceDanceRevolution X on March 16th, 2009, but were not unlocked until much later. To unlock the X-Special charts, the player must complete certain requirements for the FINAL STAGE, usually relating to the mix of origin of the song set. All the X-Special charts were unlocked for normal play on October 1st, 2009 (except PARANOiA MAX～DIRTY MIX～ in roulette(X-Special)).

All the X-Special songs require special conditions in order to make them appear. Even when unlocked for normal play, the songs below can still be played using the EXTRA STAGE system.

Due to DanceDanceRevolution X's new 1-20 scale, every song from previous releases has been re-rated.