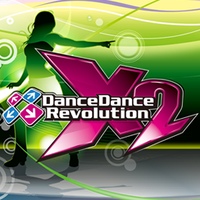 To unlock the EXTRA STAGE this time around, the player must now obtain AA/AAA all of the songs in one game session. There are no FINAL STAGE-exclusive songs in X2.

Getting a AA or higher on KIMONO♥PRINCESS on EXPERT difficulty unlocks the ENCORE EXTRA STAGE, roppongi EVOLVED. Note that are four different versions of the song; which version you get is random. You can't choose another song or difficulty other than EXPERT for your ENCORE EXTRA STAGE, though you are allowed to set options.

On August 25th, 2010, the Boss Rush X2 course was unlocked, giving access to roppongi EVOLVED's DIFFICULT charts and on more than one life for the first time.

Both KIMONO♥PRINCESS and roppongi EVOLVED were unlocked for regular play on January 26th, 2011.

Replicant D-action is a new EXTRA STAGE event in DanceDanceRevolution X2. Its design is similar to CARDINAL GATE from beatmania IIDX 13 DistorteD. By fulfilling certain requirements, the player can unlock a special folder, with each song represented by a color, and the requirements for each are listed below (Single and Double requirements must be met separately):

Once the player has met the requirements for at least one song, a special Replicant D-action folder will appear during EXTRA STAGE only, containing all songs that the player has met the requirements for. The game will first inform you on songs with high difficulties, and by opening it, the player will be locked onto the folder. Inside the folder a special BGM plays, hiding any song previews. While playing each song, the player's dance character battles a RINON clone of the song's color, who appears as a secondary background dancer.

To obtain a medal for the first six songs, players have to clear on EXPERT with a AA or better. By obtaining all six medals, the player will immediately play Valkyrie dimension as ENCORE EXTRA STAGE on EXPERT without any opportunity to change any options (except the speed mod, by pressing the left/right buttons). Note that playing the song will cost all six medals, thus the player must obtain all the medals to attempt the song again.

As of August 31st, 2010, it is possible to obtain medals by getting a AA on BASIC or DIFFICULT; however, Valkyrie dimension's difficulty will still be locked to EXPERT. In addition, any arrow-removing options (CUT1/CUT2, Jumps Off, Freezes Off) that the player has set on their sixth medal song will be unset for Valkyrie dimension. (This fixes an exploit where it was possible to play Valkyrie dimension's EXPERT chart on CUT2, making it much easier, by obtaining the last medal on Sakura Sunrise on CUT2.)

As of November 2nd, 2010, the VS REPLICANT boss course is unlocked, making it possible to play all seven Replicant D-action songs in a row on one credit, and also revealing Valkyrie dimension's DIFFICULT charts for the first time.

As of April 1st, 2011, the four CHALLENGE charts that were previously Marathon Mode-exclusive are unlocked for normal play.

In the Western releases of DanceDanceRevolution X2, due to the releases not supporting e-AMUSEMENT, the unlock mechanics of the seven songs were heavily simplified. On release date (December 31st, 2010), all seven songs were locked. On July 28th, 2011, the first three songs were unlocked for normal play and the VS REPLICANT course was unlocked, allowing access to the remaining four songs. On October 1st, 2011, the remaining four songs were unlocked for normal play.

An after-play minigame where the player is given six pieces (arrow, star, butterfly, heart, quaver, and foot) to complete a puzzle. Each puzzle piece shows three characters (except Rena's). The event started on September 1st, 2010 and ended on October 6th, 2010. The songs and Rena were all unlocked on December 29th, 2010.

An after-play minigame where players help VICTORY CONCENT and GEISHA ZUKIN throw a PiX into space and destroy as many planets as possible. The songs and PiX were all unlocked on February 23rd, 2011.

For these particular songs, the original Japanese version is used on all the difficulties except CHALLENGE. The CHALLENGE charts use the Chinese version of the song. The jacket and artist name change on the results screens, but not on song select. For the two songs not from X2, they were kept in their original release folders.

The following songs from previous DanceDanceRevolution releases can be unlocked by reaching certain ENJOY LEVELs:

Note: The songs marked with a ※ were already removed from the North American/European releases of DanceDanceRevolution X.