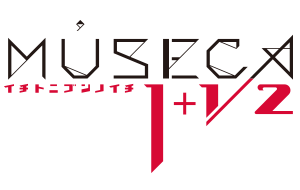 Agetta moratta is a collaboration event between SOUND VOLTEX III GRAVITY WARS and MÚSECA 1+1/2, to celebrate the latter game's launch. To unlock the following songs, simply purchase the respective song's EXHAUST chart in the SDVX Station in SOUND VOLTEX.

The event started on July 28th, 2016 and ended on March 7th, 2018. Songs not unlocked are purchasable with COLORIS (sans Brain Power, as it was removed).

Note that these songs are available by default on MÚSECA 1+1/2 machines with an offline kit.

Songs are listed in unlock order.

Note that the 幾重もの酷薄 Release MISSION was added on the second time the DJ YOSHITAKA展 event was available.

This event began on October 6th, 2016 and ended on November 3rd, 2016. It allowed players to unlock the NEW Generation 夏の流星フェスタ2016 songs to play in MÚSECA. To unlock these songs, simply play any round of beatmania IIDX 23 copula, beatmania IIDX 24 SINOBUZ, jubeat Qubell, or SOUND VOLTEX III GRAVITY WARS once.

All of the ニュージェネ流星拡散フェスタ2016展 songs were available for play by default from October 2nd to 31st, 2017 (although they cannot be unlocked during that period).

This event started on December 8th, 2016, and ended on January 9th, 2017. All of the 発見！よみがえったBEMANI遺跡展 songs were available for play by default from September 1st to October 1st, 2017 (although they cannot be unlocked during that period).

Note that the ～forever with you～ Grafica could be earlier unlocked on another MÚSECA GALLERY event, Shiori Fujisaki-ten (藤崎詩織展). Players that already had unlocked said Grafica only needed 5 credits (instead of 10) to unlock アルストロメリア and the 伝説の樹の下で Release MISSION.

By playing SOUND VOLTEX IV HEAVENLY HAVEN, the player will raise the infection level and unlock the following songs from the SOUND VOLTEX series during the respective periods. For more information on the event, see its own page.

Since March 8th, 2018, Level 8 or higher charts for these songs can be purchased with COLORIS instead, while Level 7 or lower charts are available by default.

The following songs can be permanently unlocked by playing them once when they appear on the last Friday of the month. Note that in order to unlock the current month's song, you need to have the song available in the previous month unlocked for normal play.

All of the プレミアムフライデー songs were available for play by default from August 9th to 31st, 2017 (although they cannot be unlocked during that period).

The following songs have received difficulty changes since their last appearances:

The following songs from the MÚSECA series have been removed or are absent from MÚSECA 1+1/2: