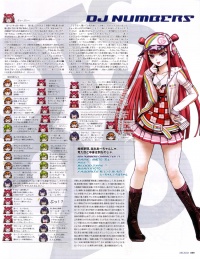 All three of the Umegiri sisters are from a family of clothes makers. In addition, all three sisters have great magical abilities. Ameto, as the oldest, was considered to have the greatest ability and so was placed to become the head of the clan. She, along with Hihumi, were responsible for taking care of a book of magic handed down generation to generation.

About three years ago, the grandmother, the head of the Umegiri family decided to place a spell on Ameto in order for her to preserve her youth. While the spell was being done, Hihumi made a mistake in the spell, causing Ameto to look much younger than she actually did. The spell would cause Ameto's body to stay young. The grandmother tried to reverse the spell, but she did not have enough magic power, although she had enough to stop the reverse aging. The problem for Ameto was that if the spell wasn't undone properly, she could experience rapid aging or death.

Soon after, Iroha ran off with the magic book for mysterious reasons. Hihumi, in charge of the book, and feeling that there may be a cure for the spell in the book, ran off to find her and punish her for stealing the artifact. Time passed, and when both did not come back, Ameto, who thought that Hihumi was shirking her familial duties, decided to go find them herself.

She then came to Tokyo looking for her sisters Hihumi and Iroha. Finding Lilith, she forced her to take her to Hihumi, and inadvertently ran into Iroha along the way. Reuniting with her sister, Ameto then used Lilith and Iroha to track down Hihumi. Confronting Hihumi about her desertion of her duties, she scared Hihumi into pleading for forgiveness. She also has "adopted" Lilith as a sister, much to the consternation of Shem.