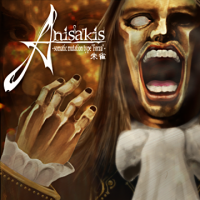 He set a foot wrong.

The person commits an offense.


However, do not set a foot wrong.

Connecting the dots between these two songs is Anisakis.

The sharp synth melodies represent the earl being infected with the ideas of dynamism.

The fleeting piano phrases show the earl's determined resistance against his "noble" madness.

As the song progresses, you can imagine the erosion of the earl's sanity.

Did he spend his later years at a solitary post, or did he die earlier?

And could another person emerge to present the key to this mystery?

All this will become clear next time.

Could this represent my story?

In 1834, Verdet, a dominating and powerful individual, during secret negotiations with "the Sparrow", was infected with "forza" and had a mental breakdown.
In pain from his disease, his ego collapsed and lost his sanity. I depicted this image of him.

His later years were shrouded in mystery then he died, of which that story can be told another time.