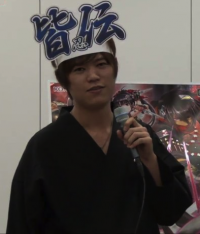 Aritomo Hamada is a Japanese music artist who started producing in 2012 and is one of the newest additions to the in-house BEMANI artist group. Before joining KONAMI, Aritomo Hamada was known as 8284, a renowned BMS and doujin composer who also won two SOUND VOLTEX contests. When Hamada joined the company, his Twitter and Soundcloud accounts were deleted, alongside all of his NicoNicoDouga uploads. His HuΣeR persona debuted in beatmania IIDX 23 copula with Highcharge Divolt, to then appear in other BEMANI games in the successive months; he was then properly introduced in the BEMANI Namahousou (kari) (BEMANI生放送（仮）) live stream of October 19th, 2016.

Hamada's music is known to showcase a digital/cyber sound with undertones of rock and world music. Hamada mainly produces dubstep, artcore, and rock songs, most of the time featuring vocals, as well as genres familiar to the music game landscape such as trance, house, and hardcore.