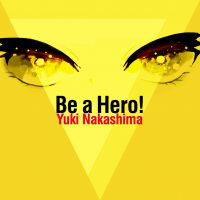 Be a Hero!'s jacket.
Error creating thumbnail: Unable to save thumbnail to destination
Be a Hero!'s pop'n music banner.

"Be a Hero!" is a new song written as the qualifying round common theme song of the BEMANI series.

The song combines the high-speed beat of thrash metal with dance elements, creating a sound that is "unique to BEMANI" music games. The vocalist Yuki Nakashima is the next generation idol of the music game world, creating a positive song full of cuteness. This is a song that every KAC contestant can enjoy, from those just trying out for the KAC to those aiming to become champions.
This is the Enjoy Entry song of The 7th KONAMI Arcade Championship, and it will be unlocked when you play during that period.

I'm grateful to be in charge of the qualifying round common theme song of the BEMANI KAC series this time!!
I've been very happy this past year just to be involved in the jubeat series which I love, but I didn't expect to sing the common theme song, so when I was first told about it, I was so surprised that I thought it was a dream.
This time, "Be a Hero!" has a very fast tempo and is a song which I think will make you want to excitedly play it in a game!
Everyone can be a hero! Let's grab glory together! It's a song that encourages us to leap towards a new stage! Let's challenge the big stage called KAC and become a hero!!!!