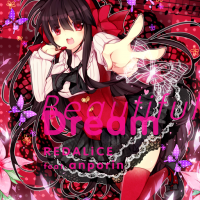 Nice to meet you, DDR players throughout the world! I'm REDALiCE from HARDCORE TANO*C!!
I'm so honored to have the chance to make a song for DDR!
I'm reminded of the days when I used to play the first generation of DDR games, sweating through my t-shirt in the middle of the summer.
Anyways, I made this song to be bright and fun.
Try jumping around and having fun with it.

And I also made the stepchart as well!
I made it with the spirit of EDIT I have, please enjoy it.
Double play was my main method of playing, so I feel that the DP charts have more power to them.
Since I not only made the song, but the charts as well, please treat it as a whole package.
The CD jacket was designed by Homare-san, the girl on it is super cute!