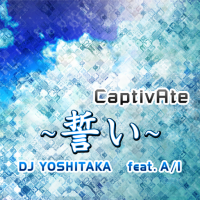 Wow, now it's our 3rd version of CaptivAte! "To see and do onto others, with no fear of risk", and then you will become the story's "judge", and see if you could keep your promises.
That is this time's story. With this song's arrival, and with the arrivals of so many other amazing songs everyone else as made, I hope the people who are interested in this song will try and check it out!

So this is the new IIDX animation! DJ Yoshitaka said, "Just feel free to draw what you feel from the song."
The last theme this time, "oath" is it? It seems to me as something paralleling, a subject that seems to be where you imagine the image to be something you have to search for desperately within your own self.
However, it seems odd returning back to the real world when you have to look for something like that!
So I did something otherworldly, like a little fairy in her own little "incident" of sorts.
An "UMA" fairy, where her wings sprout in spirit, not in actuality, to be honest.