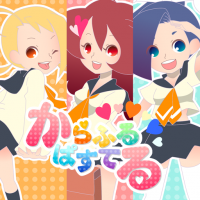 ...Sorry. Guess I'll write a serious comment now.
I can't guarantee if the song is serious or not, but...

This song was a lot of fun to record!
If the song is nonsensical, the recording and editing was also nonsensical.
Every time I had a meeting with ki☆ki, the entire song would change (laughs).
Where are you going? Colorful pastel!?

I thought that this kind of thing is one of the best parts of music!

And this story is my digression, but...
When I finished recording the vocals and work assiduously on the song, I was asked by the staff,

"Who wrote this song?"

(laughs) I thought that this kind of thing is one of the best parts of music!

Haha~ I did it! I finally did it! Don't tell everyone!!!
So, I challenged myself to do some MO☆E stuff that's all the rage now.

One day
when I had finished a lot of songs for GITADORA...
I listened to this song, which doesn't have lyrics yet.
Gai: "Wow, Jin-kun's new song has a nice groove to it..."

...A few more days later
Gai: "Oh, the song now has lyrics? Let's listen to it!"
(end of transmission)
Gai: "Something amazing is happening.... I wonder what's wrong with Jin-kun (impoliteness).
I thought about it a lot, but one thing stuck out to me...

And that's how it turned out.
It was a request from Jin-kun, which I grudgingly accepted. He asked for a loose, moe (cute?) style movie.
It was very hard to make, and I still haven't fully grasped what MO☆E is.
By the way, I named the three characters: Kokone (心音) for the clumsy girl, Hina (陽夏) for the forehead girl, and Ryou (涼) for the ponytail girl.
Kokone is naturally a airheaded clumsy girl, just as she looks. Hina looks like she's the most playful, but she's a diligent student and wears glasses. Ryou has a sober personality and is probably in the kendo club or something.
Everyone, please play and have fun!