This page is for the DDRMAX2 -DanceDanceRevolution 7thMIX- song titled DESTINY. For other songs of the same title, please see Destiny (disambiguation).

Not to be confused with My Destiny. 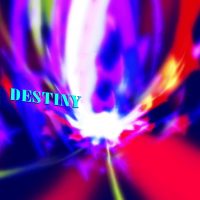 DESTINY is the fifth work in the HYPER EURO BEAT series featuring Paula Terry.
There are several real messages in the lyrics of a song called "Destiny".

"At least now, the 'destiny' you choose yourself contains pure feelings that you should hold on to forever... I want it to be 'something precious'."

It's a HYPER EURO love song with such message in the lyrics.

I thought her singing was different than usual. Is it because of the tender melody?

I'm forever in love with NAOKI & Paula's tag team.
NAOKI's songs regularly have rhythms which are easy to understand, so beginners should attempt to challenge LIGHT7.