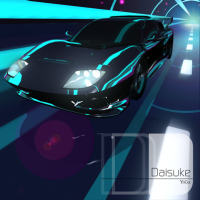 First of all, the title and the lyrics are totally different. So why is it Daisuke ... *g*
♪ Daisuke~
That part is sung over and over in different patterns. "Daisuke is so cool, let's all sing about him!", or maybe "Going back to the feelings of our middle school youth" ... I really don't get all the requests, I'm really sorry.
& Special thanks "KAHO"!

One day in December, GYO called me up and asked me, "This time we have a song called 'DAISUKE', so won't you come back and dance for uuuuus?" So, I just said "sure", and that's how I got to be able to do this.

By the way, my name is also "Daisuke", but if you write it in kanji it's like 大○ (Dai----). Anyway, this routine is a delicate mixture of parapara and jazz-style dancing. The big pose is important, so at the "Daisuke!" part make sure you pause and strike a pose, and it'll unlock the secret song! See you.

If there was one thing I could say about this movie, it would surely be:
"Dai-chan, thank you!!"

※ Denotes chart has been revised from the older BEGINNER chart: