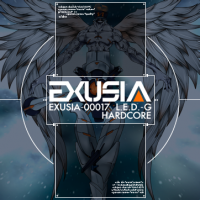 For SIRIUS, some of the songs that I titled were based on the sketches and artwork of the designers.

An example of this is DOMINION. What happened was that I was presented the image that was to be used for the song, I immediately thought of the idea "Space Hulk DOMINION", which became the title of the song.

I am a bit sorry that there was no images for GALGALIM, but if there were one, I would imagine a nice guy sitting on a motorcycle.

As for a bit of summary, in this dimension, the "Space DOMINION" are trying to eliminate the contradiction of mankind while the military powers try to stop them in a zero-sum battle...

Will you be able to stop it?

L.E.D.-G has made a song that is hardcore yet slightly delicate.
The keyword was that the song and the background had to be similar to that of the theme of beatmania IIDX 12 HAPPY SKY.
Mr. L.E.D.-G also gave me some advice.

"A mecha would be nice."

Combining different elements from previous images I made for songs, I created up a unique image.