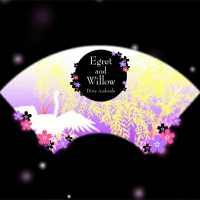 Since I was asked to do a Japanese style song, I focused on the theme of "Future flower birds" and finished it with a futuristic classic sound, while superimposing the images of the snowy egret at the summer in Kyoto with flower bird paintings.
This time, I will be glad if you can discover at least one of them, while listening the Japanese musical instruments and various other delicate sounds.