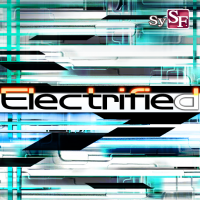 This is a transplant from DanceDanceRevolution SuperNOVA2.
Its comments are here.

Near the end of production of the game, the subject of adding a transplant song to the song list came up. I thought, "You want it now?", but we were able to convert the song quickly into the game with Sota's help. As expected, we had no time to make a movie, but....

Music transplantation and cooperation of production teams are bound to become more common as staff and teams work closer together, but the amount of cooperation has increased recently due to intense internal company improvement and company reorganizations over the years. In other words, where in the past, one could only wish for a DDR song to be transplanted to home IIDX, now it can actually be done.

If you think about it, we have already done this with 5-key beatmania transplants. (since we don't want to cut too many songs).

What's up?! This is Sota Fujimori.
How do you like "Electrified"?
In order to make the sound itself more electric and outstanding, I added more vocals and many, many layers of sounds.
If you are tired of hyper-fast tracks, choose this track for sure!