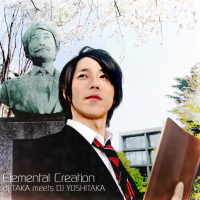 The bonds of dj TAKA and DJ YOSHITAKA! The intense synth lead is the pinnacle of the always-friends♪

The time has come.