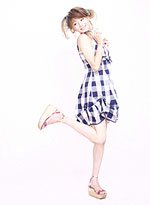 Erika Mochizuki is a vocalist that does songs occasionally for both Y&Co. and dj TAKA time to time. According to her profile, apparently, she's done modeling since she was 13, and started to do commercial music and vocals for games since she was 18. She's been on the broadway musical "RENT", and has worked for Sony Records 2003 with her solo debut under the name of "BEENY&PINKBUNNY". After this, she has been starting to offer writing lyrics and doing vocals for all sorts of musical productions. Out of all the BEMANI songs she has sung vocals for, SAMBA DE JANEIRO is the only one that she has not sang in English.