Not to be confused with Fairy Tale or FAIRY TALE. 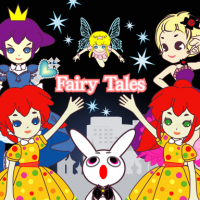 "I don't want dark songs! I want to make bright songs!", I pressed.
So, the "MODEL DD series", which is loved and hated for its dark and esoteric sound, is taking a break this time. Instead(?) I created this song with the theme of "Fairies of the midnight light". It's a hard and light song with a classical taste.
I love the fairies that appear in the game clip, they are so cute! It was worth all the pressing, right?

The theme is "Parade in the night sky".

I was so happy to be asked to participate after a long time that I felt like I could do (and did?) whatever I wanted.
A child who was loved by everyone, and a bunny who seems to be "grinning" with nostalgia...
Anyway, I've been fluttering and flapping around (laughs)
They are really happy to be able to appear in such a wonderful song!