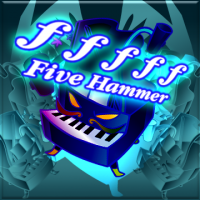 ※ The notecount of this chart is different from the old 5-Buttons chart (total notes: 237).