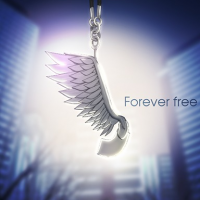 This time, by request from the production staff, I had to do a collaboration with a foreign vocalist.

The theme is "my own LA metal".

I had to listen to a lot of music from the late 1980s, when there was a large movement of American rock, and I noticed that the melodious music that I'm used to listen was not used much.

However, many of the metal bands that were successful did not just shout or play really hard; they had one or two songs acoustic songs in their albums with very beautiful arrangement and melodies. I really liked such songs, even if I was the only person listening to them.
Maybe I could have been fooled that it was just one catchy song, and I wouldn't be talking about it now.

So "Forever free" is the type of song where I'm making metal and ballad coexist.
I wanted it to become something like the last song of an album.

That is why, this time it became a conceptual work featuring Luca and the original colors members, who also worked really hard. Thank you everyone.