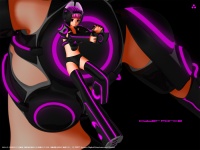 She is a specialist in anti-spyware attacks. As regimental commander, her duties include first response to any threats and instantaneous gathering of her regiment (which at maximum have 2048 individuals) for any emergencies, until all is back to normal.