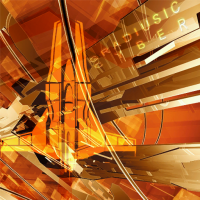 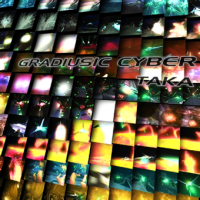 Aiming to raise the total quality mark, not just in sound but also in visuals, we formed the beatmania IIDX project to pursue synchronization between visuals and interactivity of the highest difficulty level.
In regard to this, the trackmaker known as TAKA created GRADIUSIC CYBER; a fusion of KONAMI's symbol, GRADIUS, and the new sensation known as beatmania.
We will make various adjustments to the game to challenge the beatmania maniacs and give them something to enjoy.

The song is quite challenging in both beatmania and Dance Dance Revolution, sampling and interspersing a lot of sound effects from GRADIUS, KONAMI's proudful shooting pioneer.
The song is based on the world of "GRADIUS", a game in which the player must navigate through a chaotic universe with the occasional roar of a fire dragon. The song was made with acidic analog bass riffs and chemical rhythms that further emphasize the sense of speed, while maintaining the world view of the game "GRADIUS". We hope you will take in the flood of sound that allows you to feel the power of GRADIUS not as a game, but as a visual image.

This is the only full 3D CG movie. The music was created from scratch using the completed video, so the visuals and sound, including sound effects, are perfectly linked, just like in a movie. Moreover, while this game is a successor to beatmania, this innovative style can only be reproduced in IIDX.
I'm not able to clear 7KEYS on this difficult song, but I can clear it in 4KEYS or 5KEYS, so I can still fully enjoy it.
IIDX is friendly to beginners, people who are not very good, and people who have a hard time improving. I guess you could call it an evolution, too.

※ Denotes chart has been revised from the older/newer AC chart (total notes: 204).