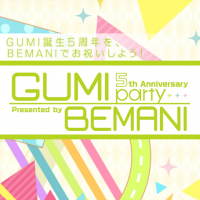 Also, in DanceDanceRevolution (2014), a new sorting by Genre (ジャンルから選ぶ), GUMI 5th Anniversary party was added from June to December of 2014.

These three songs are available in every participating games.