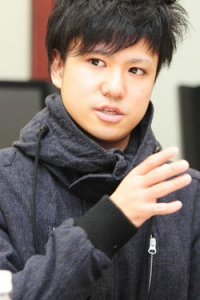 Genki Hikota is a Japanese UK hardcore and J-rock producer affiliated to Hifumi,inc.. He owns the SKETCH UP! Recordings label alongside Kento Oizumi and is a member of the HARDCORE TANO*C circle. He appears on several doujin circles, Massive Circlez and S2TB Recording to name a few, and he's part of the GAT trio alongside doujin artists aran and Ryosuke Tachibana. He also appears on commercial releases. As of late 2016, he started to use the SKETCH UP! Recordings' DJGenki sub-label for his releases.

Rarely, he makes tracks close to the frenchcore genre. As of late 2014, he's one of the producers and guitarists of the utaite metal band GRILLED MEAT YOUNGMANS and as of 2015, he's one as well for the Genki-kun Band (元気くんバンド) which comprises Yukacco, Masaya Oya and Ayato Homma. He has also been using his Spada†leggendaria alias, Gram, more frequently outside of BEMANI, primarily for symphonic psycore songs.