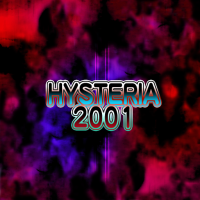 You have unlocked the song "HYSTERIA 2001" by NM. The original "HYSTERIA" debuted on Dance Dance Revolution KONAMIX and the "2001" remix has a faster beat and more R&B influences. Be careful, the steps are more challenging than the original.

It's an arrangement of a song from DDR. The song flowed into my ears naturally, so it was easy to create concepts for the movie.
I constructed the movie together with the vocal sections and catchy sounds.
I don't like it when women get hysterical. Nothing matters that much anyway.