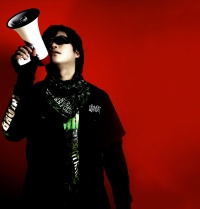 Hommarju is a Japanese music producer who makes songs under several music genres. He started off by making songs for the EXIT TUNES label and quickly expanded his contribution to many doujin circles such as HARDCORE TANO*C and SKETCH UP! Recordings, which made him quite popular.

Hommarju is an all around composer, who usually oscilates between happy and UK Hardcore, hardstyle, breakcore, and ocassionally frenchcore and speedcore tracks.

He's also well-versed on breakbeats and drum and bass, even making wonky drum and bass tracks. Lately he's been dabbling into psy trance, dubstep, trap, and future bass. He also has a penchant for rock tracks, providing guitar and vocals for his tracks.

Hommarju is a former artist of both EXIT TUNES and S2TB Recording, kors k's label. Now he runs his own label called THE NO1ZE where he does his own releases. He's also a frequent guest in different doujin circles and labels. Hommarju is also part of the beatnation Records label as of February 15th, 2014, as kors k's choice.

Hommarju is a DJ for the band Empathy Driver.