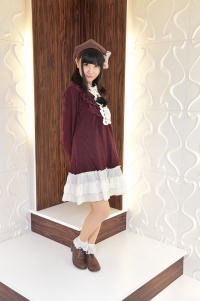 Iori Saeki is currently a voice actress belonging to swallow, PONY CANYON's voice actor office. Since then, she has deleted her old NU-KO named twitter account and started a new one under her real name. She is also currently the voice of Ren Akizuki in the BandMeshi♪ media mix project.

Iori is a special representative player in the BEMANI PRO LEAGUE ZERO event, as part of TEAM Ryu☆ directed by Ryutaro Nakahara.