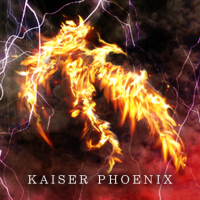 Like a real phoenix, it dances gracefully in the sky.
Flames emancipated from the fiery devildom, since then people have called it that way.
KAISER PHOENIX...

However, when I type down "放たれし (Hanatareshi)", don't tell anyone, but it keeps converting it as "鼻たれ死".