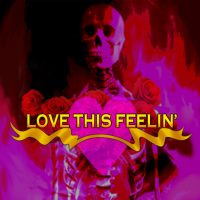 A strongly distorted, aggressive and rough guitar sound, with lo-fi jungle-based breakbeats, and the overlap of an inorganic soulful rap at the chorus, gave this song a unique flavor.

You have unlocked the song "LOVE THIS FEELIN'" by Chang Ma. This song wins the "What genre is it?" award. Everything from drum'n'bass to hard rock to funk is in this song.