LUV CAN SAVE U

LUV CAN SAVE U 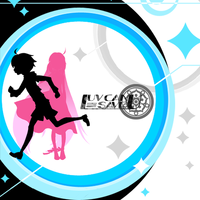 LUV CAN SAVE U's jacket.

In my teenage years, I listened to a lot of 80s Eurobeat, which really influenced my musical style.
So, hearing that the musical style was making a comeback, I decided to make a Neo 80s song to my taste.
While I wanted to express a feeling of nostalgia, I also wanted to use modern musical creations and arrangements.
I used the key of A minor to express the feeling of loneliness, and then change it to the major key only for a moment.
The four lines in the chorus, particularly the line in the chorus "Broken Heart", work really well with the rhythm of the song.
I think that I have finished a suitable song for a music game like beatmania IIDX 20.

From the moment that I heard this song, I was impressed and felt drawn towards it.
Whoa, I think it was very cool!
So I started to imagine what animation to make and I kept thinking about a character battling against an enemy winning and losing....
And as the story started to come together, I started becoming more excited and said "Yes! Let's make an animation!"
And the results....

Well...Ummm.....
I really wanted to do more for the animation than what I could actually put in the actual movie, so next time, I'll try to be more devoted to my work.