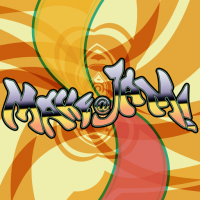 "MAKE A JAM!" is a PS original song.
It's a funky mood pop number pop featuring a cheerful ragga rap. Among the many fast tempo eurobeat-like songs in DanceDanceRevolution, there is a unique taste on lightly bouncing up, up, down, down, left, right, left, right!