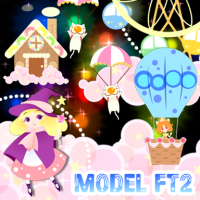 It's a sequel to Fairy Tales!
Since the song is named MODEL FT2, I wonder if there will be a FT3~
I don't know.
Everyone, do your best to clear it!

Nyaguwa! Gai here.
This time... oh my, I was in charge of the boss music clip! Whoo★! Moreover, this is the second song in the "Fairy Tales" series. If the "DD" series are brothers, then the "FT" series are sisters.
I've never been so honored in my life. I thought to myself that I have to put some energy into this one! So I decided to make it as flashy as the previous series.
I tried to keep the image of the previous work, and filled it with my own fantasy. Yes, I went as far as I could. The characters that appear here greatly resemble those of the previous work, with fairies and princesses. My girls appear here too. By the way, Takatan's first child (?), Honey (just named) from "On Cloud Nine", appears here as well.
I like colorful colors, so I was working hard to use various colors if there are many characters. Then, when all the characters were assembled in the final scene, it was as colorful, like a Sentai show. I thought, "Well... can each character have their own color that evokes an image?".
The song is hard to play, so you might not be able to see the clip, but... hey... if you play on session with a friend... and if you do your best, then maybe... ah, there it is.

Take care of my girls★