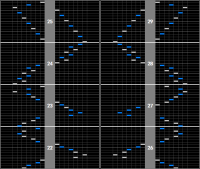 The phrase "moon race" used to refer to the American-Soviet competition to land on and develop the moon. I aimed for an image of a nostalgic future. I used elements from straight four-beat music as well as 2step and Future Jazz elements and combined them into "Future House", but I'm probably just making that genre up. I really don't know ...

The girl doing the scat is Cokeshi, who also appears on the second ELEKTEL album, which was just recently released. The guitar in the intro and the bridge sections was done by Tatsh, who also provided direction assistance for this song.

ELEKTEL has always (though fans that started with BMII are hearing it for the first time) had pretty much the same sound, whether the song was 2step, house, techno, club jazz, or what have you, but this time, with the busy development, quicker BPM, and melodious elements, it's fairly different from "the usual ELEKTEL". This time I incorporated some elements with fun gameplay in mind, and to make it more like "beatmania IIDX music".

Hi, I'm MARS, and I was in charge of the MOON RACE movie. Nice to meet you. It's very moving to be able to create a movie for IIDX, since I've been playing since the days where a single play was 300 yen (n.b.: about $2 by the conversion rates of the time, but closer to $3 now). But, since this is my first time making a movie like this, my days were full of worries from the moment I undertook this endeavour. On one of those nights, as I was listening to this song and walking along in the moonlight, I saw not the usual rabbit making mochi in the moon, but a young girl with rabbit ears. (n.b.: the traditional Japanese "man in the moon" is a rabbit making rice cakes.) The movie became what is is now based on that idea. There are improvements that could probably be made in the finished product, but I did my best to make this movie the best I could on my own abilities, so if you like it even a little bit I'll be very happy.

beatmania IIDX difficulty rated from 1 to 12.