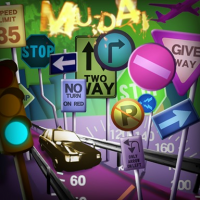 I took one version off and made a song in V5 instead.
I just took a rest, but it feels like it's been a long time.
This time I thought about an instrumental song, with a cool feeling... and tried to make it.
Of course, horns are the focus (laughs).
The title is "MU-DAI".
It has many meanings.
Untitled, dream size, unchanging...
What is your image for this song?
It's up to you to decide its color!