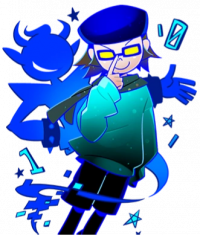 MZD, as he appears in pop'n music peace.

The man who is called the Roppongi devil. Or rather the pop'n God.
Though it might seem simple it's complicated, he acts alone in place of the characters who were sent on a journey...

MZD is an "Eternal Boy" who is the creator god of the pop'n music world. He most often appears as the character for song remixes in pop'n music.

MZD's companion is his shadow, known as ? (Hatena), who has also appeared as a pop'n music character.

MZD appears in the MISS background of every pop'n music 3 song.