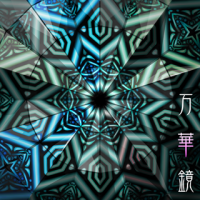 One day, when I went to shopping in a department store, there was an event called "Kaleidoscope Exhibition".
Usually, I'm not at all interested in kaleidoscopes, but I was in the mood to "take a look" at that time.
If you look at them, they're quite interesting, and I found myself playing with them for a long time.
So at that time, I thought that... making a song with melody changes would be interesting, so this song was completed.
Initially, you might hear a pretty confusing song, but if you listen well, you will hear the idea quite naturally.