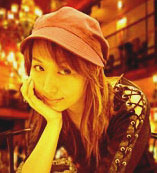 Miki Masuda is a Japanese vocalist who debuted in 1996, performing the theme song of the Japanese TV show Mogumogu GOMBO (モグモグGOMBO). After releasing her second single the following year, she started contributing to BEMANI under the request of Tatsuya Furukawa, performing songs for the pop'n music and beatmania IIDX series, and even appearing in the pop'n music live events.

Since her last appearance in BEMANI, Miki has performed theme songs for anime series, and has contributed to Sound Horizon projects.