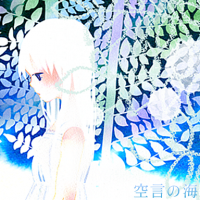 Amazingly, this likable song appears to soften the heart.

The title is read as "Munagoto no umi".
I think ruins and remains have a unique beauty.
The light parts that once shone from glory and the dark parts that have been stained from blood in battles.
I think they lyrically channel this flow for several years, exuding a type of divineness.
This song expresses the ruins contained within the heart, and although the lyrics are dark, I hope you can feel the unique beauty of the song.