This page is for NEMESIS by ARCH ENEMY from GuitarFreaks V4 & DrumMania V4. For NEMESIS by D.J.SETUP from beatmania IIDX 6th style, please see NEMESIS. 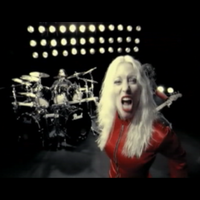 We are so excited to be a part of this cool game!
"Nemesis" is one of the most difficult songs to play in our live set - but I am sure you players out there are ready to meet the challenge!
One for all - All for one WE ARE NEMESIS!

"Nemesis" is one of my favorite ARCH ENEMY songs, both to play and listen to.
Make sure that you are relaxed when the song starts, otherwise you might burn yourself out before it's finished...good luck!