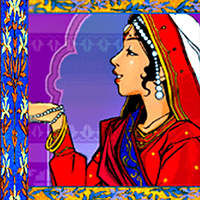 The vocalists are "ASMAT & emi". ASMAT is Indian, and the Hindi lyrics were made by him.
A wonderful singing voice from India has arrived. Although emi is Japanese, she received a special Hindi lesson from ASMAT and she also has a wonderful singing voice. In dm, Indian percussion instruments like tabla can be played.
It's a difficult song but do your best and clear it.

Continuing from "BALALAIKA, CARRIED WITH THE WIND", I was in charge of the foreign colored "O JIYA" video. I made it thinking of the vivid colors of an Indian painting. The singing Hindi voices in this song are wonderful. I was inspired by them, as the picture of the woman in the video was drawn while imagining her based on the vocals. By the way, the model of the man with a snake is a manager of an Indian curry shop near the highschool where I attended.