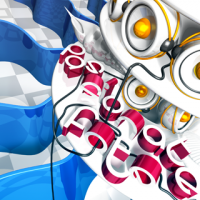 Is this the third HANDZ UP song?
After Second Heaven and Dazzlin' Darlin, I went for a different feel this time.

HANDZ UP really fits the mood of a seaside resort, but I wanted to shift more towards a POP melody this time.

Dai helped me a bit in the lyrics and the musical direction of the song.
This song has a bit of an airy feeling to it, and I would like for you all to play it.