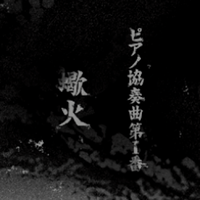 Virkato Wakhmaninov (1873-1974) was born to an average working family making matryoshka in the Caucausus mountains. His father wanted him to grow up to become a splendid man, so he gave him the name virkato (which means tomcat) and raised him to become a wrestling pro. He also took piano lessons from his mother, and his talent began to blossom.

Unfortunately, a fall in the market value of matryoshka led to his parents' financial downfall. In the end, even their beloved Steinway was seized, and Virkato took to practicing straight out of textbooks, using the backs as mock pianos. The memorial piano concerto no. 1 "ANTI-ARES" was born from these feelings of loss and despair.

As this is a piece in three movements, it is fairly typical of the structure of most piano concertos. However, since the first performance was on a great keyboard and disc, it was necessary to halve the length of the piece, and so most of it takes on the character of the first movement. For that reason, the differences between contrasting passages (light vs. dark, high and low polyphony) are more pronounced, like something out of the children's series "Yokatta ne Ned-kun".

Satisfied with the results of this first performance, Virkato, caught up in the elation of the moment, cried, "Won't the people who buy the soundtrack listen to something even more repulsive!?" It's probably well that he stopped there.

After that, Virkato himself spoke fairly often about this "arrangement for a great keyboard and disc", but in his last years he left behind these words: "An arrangement for a keyboard of seven keys may be possible". It is only now that this dream has been realized.

Since this song is written in the genre of dirge, we thought, "Why don't we light candles in the shape of Scorpio?" We were able to get the okay for this from the composer, Virkato Wakhmaninov. (Wait, 1873 to 1974!? That means we must have been talking to a ghost ... oh well.)

Since there weren't any real good locations for filming something with fire, I ended up filming it at my own house using spray digestive and water break buckets ... right around where the candle falls over at the end of the song, it ended up falling over and burning my tatami a bit ... ehehe.

I did post-production for VJ GYO's film this time. It was a pretty tough job, but to match up a good video for such a dignified song I was willing to put a frightening amount of effort into it. It's kind of a creepy feeling. It was actually pretty fun to put something together that's heavy enough to move you to tears.

※ The notecount of this chart is different from the old 5-Buttons chart (total notes: 217).